On the way to work today, two ambulances passed me.  This was right in the area of Ted’s accident and during the same time of day.  Immediately, images of Ted lying on the gurney flashed through my mind.  I tried to block it, as I so frequently have to do, but I couldn’t help but to picture him that day, six months ago, when the ambulance rushed him to the hospital in a vain attempt to save his life.

I saw him in the new shirt and pants he was wearing that day, which he got the weekend before when he took Eleanor on a “field trip” to Dillard’s.  When he got home from the store that day, he told me to close my eyes while he held something behind his back.  As I opened them, I saw him grinning, holding a beautiful high-neck black dress that he said Eleanor “thought would look really nice on mommy and accentuate her neck.”  He said I didn’t have to try it on right away but I could if I wanted to (hint, hint).

That was one of his countless endearing qualities – he loved making people smile, and he got excited about it.  The dress fit perfectly and we decided that I’d wear it to the company Christmas party in a few months.  We loved those parties as it was a rare opportunity for us to dance (and we oh-so loved dancing), so we already began planning who we’d ask to babysit.

As it turned out, I wore the dress 10 days later at his funeral.

All of this ran through my mind in the remaining half mile to the office.  By the time I pulled into the parking lot, my heart felt like barb wires of emotions were choking it: the horror of picturing my husband in the back of an ambulance, the sweet sadness of his last thoughtful gesture, and the crushing disappointment of yet another plan that would never come to fruition.

When I walked into the office, I was greeted with smiles and hopeful faces.  This is how it always is.  They hope I’m doing better, they hope I’m okay.  They ask how Eleanor is and I beam as any parent in love with her baby would, and tell them how sweet her little spirit is.  I tell them something funny she’s done recently so we can laugh and pretend that I’m just another mom sharing stories about her kid.

Inside I’m trying to push down all the feelings that waved over me in the 60 seconds before I walked in the door.  I’m trying to be the Maureen they all know.  The one who’s easy to laugh (too loud probably) and makes jokes – usually about herself.  The one who maybe asks too many questions (because she just likes people), and gets emotionally invested in other’s lives – despite the fact that she’s been told she can’t save the world.

Some of these traits come out to play when I’m leading orientations, which I absolutely love.  This is for new employees company-wide, so people dial into my web conference from all over the country, and sometimes the world.  I am fascinated by different places and recreation, so I abuse my position by getting people to talk about where they’re from and what they like to do for fun.  The best orientations are when the orienteers get gabby themselves and begin connecting to one-another over the virtual chat box.

Because I only work part time, and usually from home, when I do my orientations I use one of the collaboration rooms at the office.  These are former private offices that have been turned into public spaces for people who need a common area but not a full conference room.  It just so happens that the room I use is Ted’s old office.

The office that when he was newer to the company, I’d pretend to stop in just so I could raid his candy dish, but in actuality so I could talk to him about whatever I could come up with.  The office that, once we started dating, I’d swing by just to tell him I loved him or to see if he wanted to sneak a surf session in after work.  The office that we punked for his birthday by wrapping everything is saran wrap and replacing his keyboard with one that had grass growing up through the keys.  What?  He had also been at a fishing tournament in the Bahamas for a week so it needed to be punked. 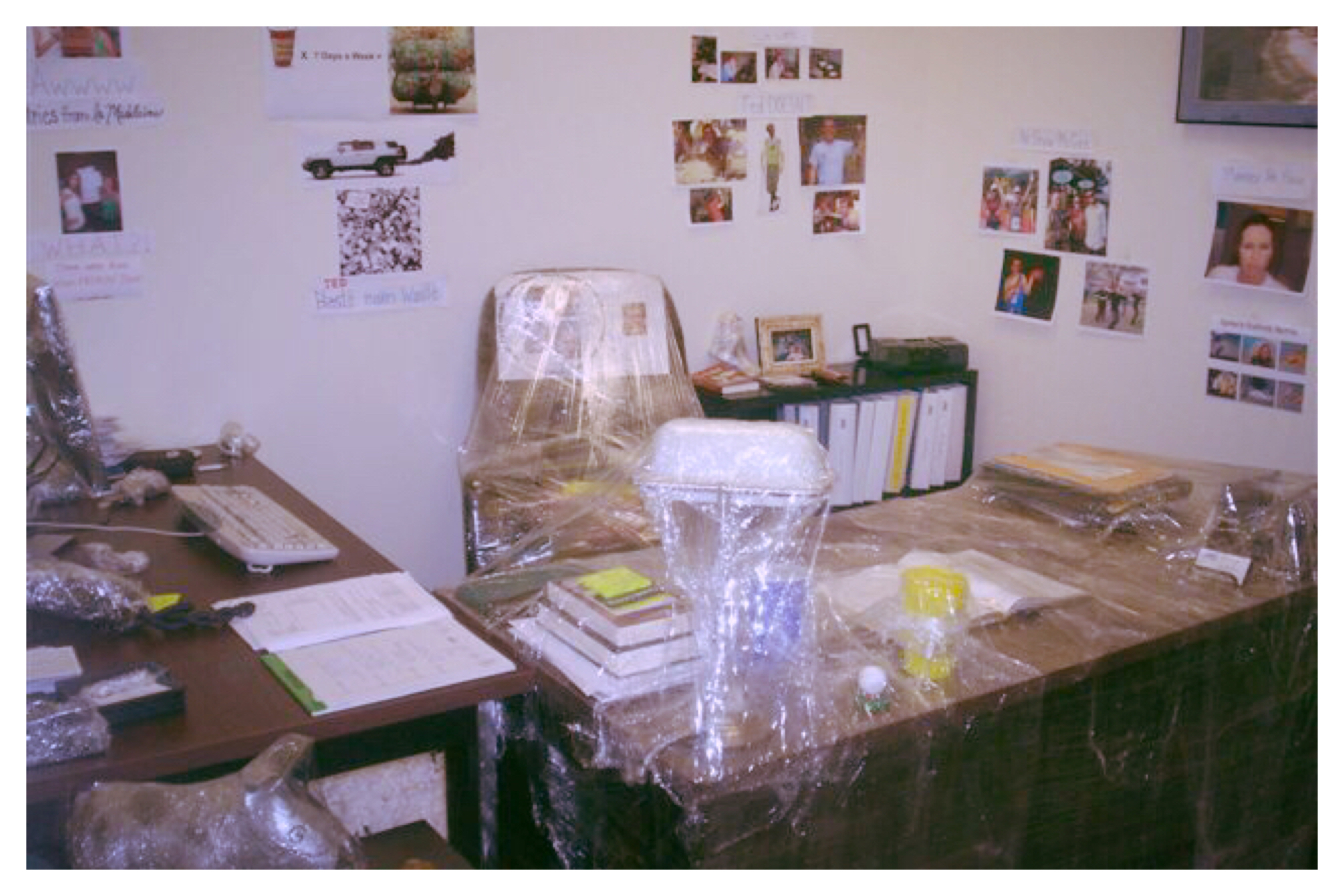 This office holds so many memories for me.  But now his furniture is gone and the walls are no longer decorated with his pictures and plaques.  The only thing that remains of him are the scuff marks on the wall under where his desk once was and where his feet would hit.  He always joked about his big feet.

So I sit, trying to block out the ambulance, and the images, and the bittersweet memories, and get ready for my new employees.  They, after all, have their own set of concerns and my job is to make their first day a little less confusing, and (hopefully) a little more fun.

And with that, my next orientation starts and I begin getting to know the orienteers.  All the while I try to pretend – if even for an afternoon – that my life isn’t what it’s become and I’m old Maureen, making people laugh.

Comments Off on Only Footprints